Many of you will know the Carl Sandburg poem “Fog.” Sandburg’s apt description of fog’s “little cat feet” stays in one’s memory, reemerging when the time is right, as it did for me last Sunday when we enjoyed a cool, billowy fog after the previous day’s snowfall.

Clearly, Sandburg knew something about the movements of fog and cats.

Here in the monastery, we are also coming to understand the soundless movement of cats, or, at least, the movement of one special feline. Her name is Ladybug, although we also refer to her as Lady Bug or “Lady.” (Poor Clares were originally known as “Poor Ladies.”)

Her movements are enchanting and thrilling. She is a jumper. She likes to play. She stretches languorously like a diva and then takes off in a flash the next moment. She guards her thoughts and intentions and keeps us guessing.

Our own movements, in contrast, are more predictable. She knows us better than we know her and can recognize each sister’s footsteps in the hall. In the silence of the early morning, the shuffle of feet and rustle of habits are not mysteries to her. With senses keener than ours, she anticipates our movements. She models the expectant waiting and listening of a contemplative.

We know that St. Clare had a cat, and a very attentive, obedient one at that. Shortly after Clare died, her sisters were interviewed as part of the promotion of the Cause for her canonization. One of the sisters, Sr. Francesca, reported that when Clare was bedridden and unable to reach a towel that she needed, the cat brought it to her.1 This incident appears among the accounts of the healings and miracles associated with Clare and is the reason why Clare is sometimes depicted with a cat.2 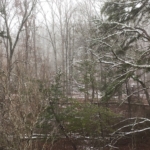 There is a lesson here for us, if we are willing to learn, as St. Francis did, from our fellow creatures. Do we listen with acuity and focused attention? Do we take the time to observe what is happening around us? How well do we know those with whom we live and work? How able are we to discern the movements of the Spirit in our lives and in others’ lives? Do we watch and wait for God in prayer? Indeed, do we know the sounds and movements of our God?

In sum, can we be alert for and attentive to God and to each other, or will opportunities for grace pass us by, retreating quietly and quickly like fog on little cat feet?