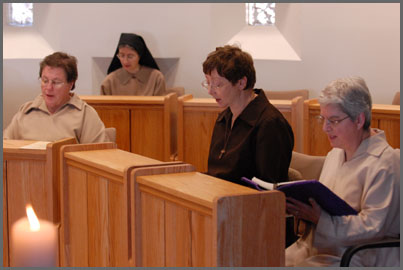 On a rainy March 1st in 1955, twelve Poor Clares courageously left their monastery in Jamaica Plain, Massachusetts and arrived in Greenville, South Carolina to establish the first contemplative community of women in the state.  They had been invited by Bishop John Russell of Charleston, who wanted to have a monastery of Poor Clares in the upstate because he believed that their prayers would help the work of the Charleston Diocese.  The people of the Diocese, especially those in the Greenville area, welcomed the Sisters and supported them with their requests for prayer and generous gifts of necessary alms. They continue to support the sisters and many have developed a close relationship with the monastery. Over sixty years after its founding, this monastery of Poor Clares remains a quiet, powerful, prayerful presence in the state.
In April of 2008, after four years of prayerful discernment, planning and subsequent construction, the Poor Clares relocated to a new monastery at 37 McCauley Road in Travelers Rest, South Carolina.

Although each monastery is autonomous in governance, we are united with over 17,000 Poor Clares in 900 monasteries in over 70 countries throughout the world, including 33 monasteries in the United States. We are bound together in mutual support and Christian love, and in our observance of the Rule of Clare and the General Constitutions approved for us.